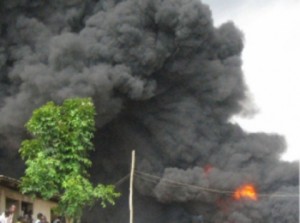 Explosion at the armoury section of the Maxwell Khobe Cantonment, 3rd Armored Division of the Nigerian Army, Rukuba in Bassa local government area of Plateau State, yesterday, led to the death of two soldiers, injuring one other.

The barracks was thrown into confusion as the incident occurred around 11:21am when some expired ammunition were being separated from the functional ones by the soldiers.

The incident fueled rumours that terrorists had attacked the military formation. However, the Deputy Director, Army Public Relations, Colonel Texas Chukwu, in a statement, confirmed the explosion and the deaths but debunked the insinuation that insurgents exploded bombs in the cantonment.

“The cantonment was not under attack nor attacked by insurgents; the explosion heard in the cantonment was from an accident that occurred while troops authorized to destroy unserviceable ammunition were transporting them.

“Some of the unserviceable ammunition exploded in the process of being moved to the demolition site. The explosion did not affect the cantonment or neighbouring communities, unfortunately two soldiers lost their lives and one sustained injuries. Normalcy has since returned to the area,” he said.