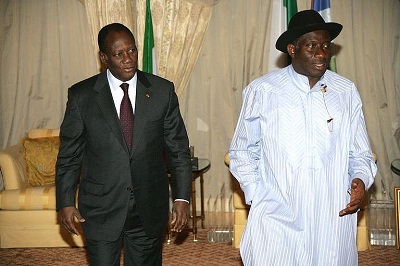 President Allassane Quattara of Cote D’voire on Monday said the peaceful manner in which Nigeria’s 2015 general elections were conducted and the way President Goodluck Jonathan conceded defeat would forever remain a legacy for Africa.

According to the Ivoirian president, the Economic Community of West African States (ECOWAS) owed Jonathan a lot for taking the bold step of conceding defeat to forestall a civil war in the country.

Quattara spoke with State House correspondents shortly after a private meeting he had with President Jonathan inside the Presidential Villa, Abuja.

He said he appreciated Mr. Jonathan’s gesture because of the nasty experience he had after defeating his predecessor, Lawrent Gbagbo, in a general election about five years ago.

He said Gbagbo’s decision not to concede defeat led to a civil war that claimed the lives of about 3,000 people.

Quattara said, “You know that about five years ago, Cote D’voire had elections and I won the election and the former President decided not to leave office.

“This brought the civil war. Three thousand people were killed and we were put at the hotel for protection by the United Nations for four-and-a half months.

“We were there without food. It was only after four-and-a-half months of imprisonment in that hotel that finally, we were able to leave the hotel after the former President quit and finally left office for me.

“I am saying this to show that what happened in Nigeria is a lesson to all of us and please accept my admiration.

“I think that avoiding violence, avoiding civil war when we have elections in Africa should be our utmost objective. People are more important than power”.

Quattara said he was not surprised at Jonathan’s decision and that was why he decided to visit him and congratulate him, the President-elect, Muhammadu Buhari and all Nigerians.

The visiting Ivoirian leader recalled that he was ECOWAS chairman for two years after Jonathan and the two of them had to deal with very difficult issues like the wars in Mali, the terrorist situation in Northeastern Nigeria, the unrest in Guinea Bissau and the problems in Togo.

“You were always present. For us, you are a West African before being a Nigerian and we thank you for what you did for West Africa.

“We also were together to set up the partnership agreement with the European Union and only West Africa has been able to do this.

“My brother, you have shown support to me during the difficult years I went through, you’ve shown friendship to me all these years and so I wanted to tell you thank you”, he added.