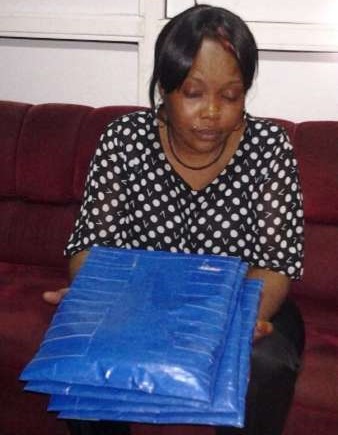 The suspect, identified as Odhiambo Samira Johnson, 42, was arrested for being in possession of four blue parcels of white powdery substance that tested positive for cocaine, weighing 5.345kg.

The Kenyan is among three persons arrested on Tuesday by the anti-narcotics agency in Lagos.

The other two suspects, who are Nigerians, claimed to be automobile parts dealers based in Uganda.

They were identified as Ntoruka Emmanuel Chinedu, 41, and Ndubuisi Offormadu Innocent, 49, and were caught importing 6.250kg of cocaine and 1.490kg of heroin into the country.

The NDLEA Head of Public Affairs, Mitchel Ofoyeju, who confirmed the arrest and seizure yesterday, said that the total weight of the drugs seized from the trio was 13.085kg, comprising 11.595kg of cocaine and 1.490kg of heroin.

According to Ofoyeju, the NDLEA Commander at the Lagos Airport, Hamza Umar, who personally supervised the interrogation of the suspects, said that they were apprehended while trying to smuggle the illegal drugs into the country.

NDLEA preliminary investigations revealed that the Kenyan-born Johnson departed Bujumbura in Burundi en-route Nairobi, Kenya to Lagos on a Kenyan Airways flight before she was picked up by operatives of the agency during screening of passengers.

Confessing to the crime, Odhiambo said, “I am a professional dancer in Kenya. I was given the school bags in Bujumbura by a friend to deliver in Nigeria. When I got to the airport in Lagos, the customs searched my luggage and found the drugs”.

He confessed: “I have lived in Uganda for two years. I am married with two children. I came to Nigeria to attend my brother’s wedding ceremony. While I was preparing to leave Uganda, my friend gave me a bag to take to his brother who lives in Nigeria. Unfortunately, the drug was detected inside the bag”.

Innocent, who hailed from Abia State, in his confession statement, claimed that he was a victim of circumstance.

He said: “I went to a friend in Uganda to lend me some money but he gave me the option of drug trafficking. I decided to give it a trial for the very first time and it turned out this way. I was promised 3,000 dollars but I am very sad now, because I am missing my wife and four children. I have lived in Uganda for 18 years”.

“In spite of the new tactics adopted by drug barons, the NDLEA is still intercepting drugs. Ordinarily, Uganda and Kenya are not known to be source countries for cocaine and heroin but the suspects were unable to evade arrest due to the diligence of our officers”, he stated.

Mr. Giade added that all the cases are being investigated and urged members of the public to report suspected drug traffickers to the nearest NDLEA office.