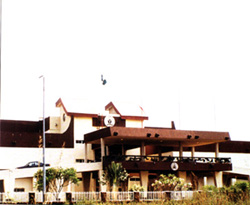 Imo State lawmakers have protested the non-payment of two months salaries by the administration of Governor Rochas Okorocha.

Rising from a plenary, yesterday, they marched to the Office of the Accountant-General of the state to protest the non-payment of their two months salaries and allowances. They also lamented that workers in some ministries and parastatals had reportedly not been paid their February and March 2015 salaries.

The House of Assembly, after the motion, resolved to meet with the Accountant-General and the Commissioner for Finance, to ascertain why civil servants and legislators are being owed.

The lawmakers, however, could not meet the Accountant-General, Mrs. S. N. Udogu, who was said to be attending to another official assignment somewhere. But Vanguard learnt that Mrs. Udogu was promptly alerted of the lawmakers’ protest march and quickly scampered to safety before their arrival.