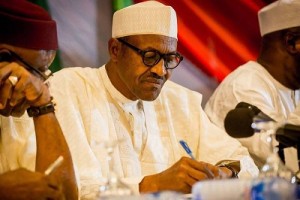 President of Niger Republic, Mahamadou Issoufou, has expressed confidence that Nigeria’s president-elect, Gen. Muhammadu Buhari, would deliver the dividends of democracy to Nigerians.

Speaking through the majority leader of the Nigerien National Assembly, Mr. Zakari Umar, when a delegation from Niger Republic paid a congratulatory visit to the Sokoto State Governor, Alhaji Aliyu Wamakko at his residence in Sokoto, Issoufou said he had no doubt that Buhari would meet the expectations of Nigerians based on his antecedents.

He described Buhari as a man of integrity and an incorruptible leader that has what it takes to take Nigeria to the next level.

“Your excellency, the people of Niger Republic are happy with the wind of change and the peaceful conduct of the March 28 and April 11 general election in Nigeria.

“This is because of our belief that anything that affects Nigeria affect Niger Republic and other neigbouring countries,” he said.

The Nigerien leader therefore urged Buhari to be fair and just to all Nigerians irrespective of ethnic and religious affiliation.

He expressed optimism that the new change in leadership would usher in prosperity and progress to Nigeria.

In his response, Wamakko pledged to sustain the long existing relationship between the people of Sokoto and Niger Republic.

“The people of Sokoto and Niger Republic are brothers and of the same race but only separated by a border established by the colonialist over a century ago,” he stated.

He also promised to deliver the Nigerien president’s message to Buhari.