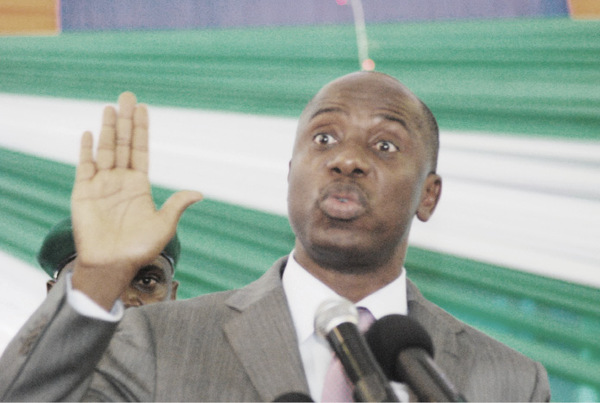 Governor of Rivers State, Chibuike Rotimi Amaechi, has alleged that the First Lady, Dame Patience Jonathan, has been putting pressure on the Independent National Electoral Commission, INEC’s Resident Electoral Commissioner in the state, Mrs Gesila Khan, to rig Saturday’s Governorship and House of Assembly elections in favour of the Peoples Democratic Party (PDP).

Amaechi, who made the allegation while speaking at a town hall meeting, held at the Dr Obi Wali International Conference Centre, Port Harcourt, Thursday, said the first lady, who arrived Rivers on Wednesday, has been holding series of meetings with senior officers of the security agencies including the State REC, Khan.

The governor said, “The wife of the president has been holding series of meetings in her house aimed at influencing the outcome of the election. We will resist it. We will not allow what happened during the presidential election to happen again. Mrs Jonathan cannot choose a governor for us. Rivers people have the right to choose who should be their governor”.

Gov. Amaechi, who doubles as Director-General of the APC Presidential Campaign Organization, wondered why the president’s wife is so interested in the governorship election, adding that Mrs. Jonathan also requested for the deployment of security men to Rivers State during the last election.

Amaechi said, “Let the wife of the president remain in her house. She should not foist a candidate on us. We the people of Rivers State will decide who our next governor will be. The president’s wife brought militants back to Rivers State so that they can be used to rig election. We will chase away the militants after the election”.

He insisted that members of the All Progressives Congress will not vote tomorrow if they do not see the result sheets and this will apply to all the units and wards in the 23 local governments, and urged members and supporters of the APC to be very vigilant.

“We will do what we do in our village: we call it the Obima formula. Our youths usually lock down the village. No one comes in and no one goes out. I am pleading that INEC should not endanger the lives of its staff by holding on to the original result sheets”.