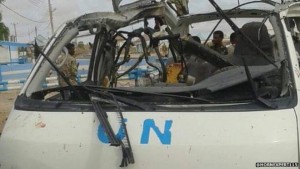 A suicide bomb attack on a United Nations vehicle in Garowe, the main city in Somalia’s Puntland region, has killed seven people, police say. The UN children’s fund, Unicef, says four of its staff are among the dead. BBC has more:

Police commander Ahmed Abdullahi Samatar says that he believes that one of the bodies belongs to the man who blew himself up. which is battling Somalia’s government for control of the country, has said it carried out the attack.

Witnesses have told the BBC that 10 people were killed but this has not been confirmed. Unicef said that in addition to those killed, four other of its staff are in a serious condition.  UN Special Representative in Somalia Nicholas Kay has condemned the attacked and said he was “shocked and appalled by [the] loss of life”.

Al-Shabab, an affiliate of al-Qaeda, is battling Somalia’s government for control of the country. At least 13 people have died over the past two days in a series of attacks which have been blamed on al-Shabab.