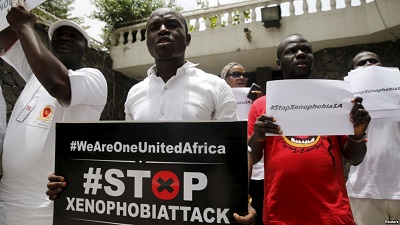 South Africa on Sunday condemned Nigeria’s decision to recall its Acting High Commissioner, Martin Cobham, and his deputy, Uche Ajulu-Okeke, over a spate of attacks against Nigerians and foreigners.

At least seven people have died with thousands forced from their homes over a month of attacks on foreigners and foreign-owned businesses and property in South Africa.

The South African Department of International Relations and Cooperation, DIRCO, called the step by the Nigerian Government “unfortunate and regrettable”.

In a statement, Clayson Monyela, spokesperson for DIRCO, said the South African government was shocked that the Nigerian government would resort “to such an extraordinary diplomatic step to express outrage at actions or behaviour of another government”.

Nigeria’s Minister of Foreign Affairs, Amb. Aminu Wali, in a statement Saturday, summoned Mr. Cobham and Ajulu-Okeke “for consultation” over the “ongoing xenophobia”.

The statement, however, acknowledged that South African President Jacob Zuma has condemned the attacks.

In its response, the DIRC said: “We are not sure which actions or behaviour of the South African Government the Nigerian Government is protesting”, adding that “It is only Nigeria that has taken this unfortunate and regrettable step. If this action is based on the incidents of attacks on foreign nationals in some parts of our country, it would be curious for a sisterly country to want to exploit such a painful episode for whatever agenda”.

Mr. Monyela said despite the recall, South Africa remained committed to a strong bond of friendship and bilateral relations with Nigeria despite the death of 84 South Africans at a guest house of the Synagogue Church of All Nations, which collapsed last September.

The statement insists that the South African government and citizens have been “decisive and unequivocal in condemning and rejecting the attacks on foreign nationals” and insists that “through our interventions, relative calm and order has been restored”.

The DIRCO also took a jab at the outgoing administration of President Godluck Jonathan saying it would raise its concerns through diplomatic channels with the incoming Muhammadu Buhari administration and referencing the failure of the current administration to rescue the kidnapped Chibok girls and also end Boko Haram insurgency.

“We shall also continue to support and not blame the Nigerian Government as it battles to deal with Boko Haram that continues to kill many innocent civilians”, the statement said. “We hope that the more than 200 girls kidnapped by Boko Haram will someday be reunited with their families”.

It would be recalled that Zulu King, Goodwill Zwelithini, recently denied sparking the attacks with comments about foreign workers, insisting that his words were “misrepresented” by the media.

Speaking at a rally last Monday, the powerful monarch described the attacks as ‘shameful”, pointing out that “If it were true I said foreigners must go, this country would be up in flames”.

“My speech… was directed at the police, calling for stricter law enforcement, but that was never reported”, he said.

“The public was instead given another side of my speech, which has been twisted and misrepresented.

“This violence directed at our brothers and sisters is shameful”.