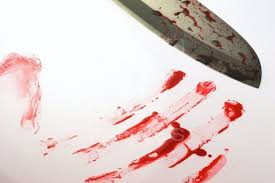 A 33-year-old trailer driver, who reportedly stabbed his friend to death on Monday night at Amuwo Odofin area of Lagos State, has confessed that his action was a mistake he regretted. It was learned that the suspect, identified as Tunde Azeez, allegedly stabbed Lukmon Ayedun with a broken bottle at 8:42pm during a brawl. Vanguard reports:

Vanguard learned that trouble started when the suspect purportedly bought food from a vendor, woke his friend from sleep to eat. His actions provoked Lukmon, who reacted by hitting Azeez and a fight ensued. Azeez, a father of one from Ogbomosho, told Vanguard: “I did not kill him deliberately. All I did was wake him up from sleep so that he could eat with me. I did not know it would make him angry or degenerate to a fight, let alone lead to his death.

“What actually happened on that fateful day was that I went to buy food from a nearby food vendor at Amuwo Odofin. When I came back my friend Lukmon was sleeping. “So I woke him up to eat. He got angry and gave me a blow. I was surprised, so I asked him why he was acting so weird and if he was alright. “As if that was not enough, while I was asking him what was wrong with him, he broke a bottle and stabbed me on my left hand. “Immediately, I took a bottle, broke it and stabbed him on his head.

“Afterwards, I ran to call Sir K, an Oodua Peoples Congress, OPC, Commander and others to intervene because Lukmon was still holding a bottle, making attempt to stab me again. “When Sir K and other people came to intervene, they decided to take us to the hospital because we were bleeding terribly from the injuries. “He fell off the motorcycle and died on the way to the hospital.