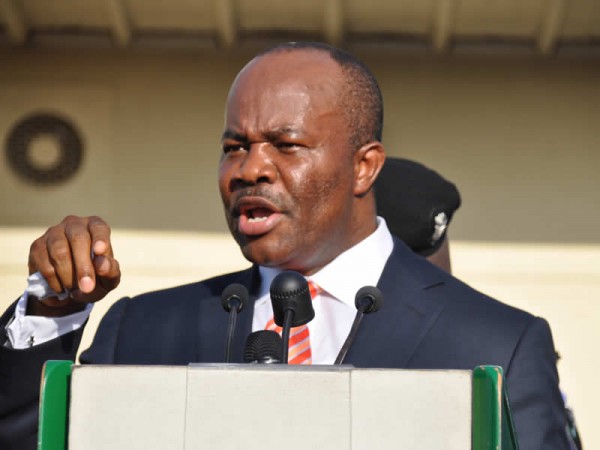 Governor of Akwa Ibom State, Godswill Akpabio, has asked the President-elect, Gen. Muhammadu Buhari, to support the 8th National Assembly in reducing the enormous powers the Federal Government wields by devolving some of the powers to the state governments.

Akpabio, who claimed that Nigeria was operating a unitary state because of the enormous powers of the Federal Government, stated this during a Channels TV programme titled, View from the Top, on Monday.

The outgoing governor also identified complacency as the reason why his party – Peoples Democratic Party – failed at the last general elections, adding that the party realised too late that the All Progressives Congress had captured the South-West.

The PDP Governors Forum Chairman said it was unfortunate that state governors had to seek the permission of the Federal Government before approaching the bond market for loans to undertake capital projects even though their states have the capabilities to pay back.

The senator-elect said, “The present revenue sharing formula should be reviewed in such a way   that the Federal Government does not take too much money and then the state governments that have much to do, receive little or nothing and end up becoming salary paying centres instead of centres of development. We must also make the Federal Government less attractive.

“Some of the responsibilities on the exclusive list should be removed. If we are a true federal state, like Australia, we should allow the state governments to partner with the private sectors from outside the country.

Akapbio, who won election to the Senate, expressed confidence in the ability of Buhari to deliver good governance.

He said, “I am happy that somebody like Muhammadu Buhari is coming to power. He is not coming to make money but to make a name for himself and deliver good governance. The incoming administration must support the lawmakers to reduce the powers of the Federal Government”.

“The PDP and the APC must collectively come together to reduce the weight on the Federal Government”, he added.

Speaking on his achievements in office, Akpabio claimed that he is the only governor in the country, who has been able to achieve 20 per cent in recurrent budgetary expenditure and then 80 per cent capital expenditure.