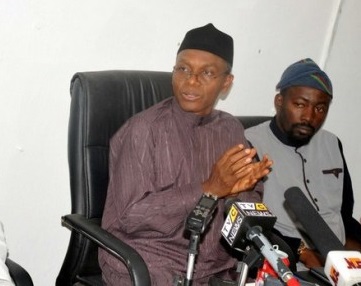 Kaduna State Governor-elect, Malam Nasir el-Rufai, on Wednesday raised the alarm that some fraudsters had been using his name to defraud unsuspecting members of the public across the state and even beyond.

Specifically, the former FCT Minister said the impostor created an e-mail address in his names and used it to criminally demand money from the public.

According to his spokesman, Mr. Samuel Aruwan, the fraudster had sent several messages to people, asking them to remit the sum of N150,000 to a Mainstreet Bank Account.

He, therefore, urged the general public to be wary of such dubious elements, warning that Mr. El-Rufai never directed anybody to collect money on his behalf.

Though, he said the case had been reported to ‘hotmail’ and the relevant security agencies, Aruwan cautioned the public to take necessary precaution in order not to fall victim of the fraudsters’ antics.

“This is not only theft of identity but case of fraud, impersonation and total misrepresentation of the person of the Kaduna State Governor-elect, Malam Nasir Ahmad El-Rufai.

“We are, by this notice, calling on the general public to disregard any electronic message and others received in this regard. It is criminal and not from the person of the governor-elect.

“The public should not only disregard fraudster(s) impersonating Malam El-Rufai but report (him/her/them) to security agencies or alert the office of the governor-elect for prompt action and onward prosecution.

“This is a clear case of impersonation as the governor-elect will never ask anyone for money in this way. Anyone that receives this kind of email request should know it is not from Malam El-Rufai but from fraudulent elements”.