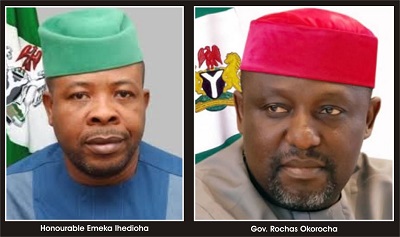 Governor of Imo State, Owelle Rochas Okorocha, has said the petition challenging his re-election as governor of the state will amount to a wild goose chase.

The Peoples Democratic Party governorship candidate in the state and Deputy Speaker of the House of Representatives, Hon. Emeka Ihedioha, had approached the governorship Election Petitions Tribunal seeking nullification of Okorocha’s victory.

Ihedioha cited “violence, intimidation, widespread malpractices and partisanship on the part of the Independent National Electoral Commission” as grounds upon which he was praying the tribunal to nullify the election.

But Okorocha, in a statement on Wednesday by his Special Senior Adviser on Media, Sam Onwuemeodo, said the PDP candidate’s trip to the elections tribunal will end up being an exercise in futility.

The governor, who said he was ready to oppose Ihedioha’s claims at the tribunal, said the evidence at his disposal will reveal that the PDP flag bearer was the brain behind the malpractices that he had alleged.

Okorocha described Ihedioha’s move as a mere ploy to prevent the remaining members of the PDP in Imo State from defecting to the All Progressives Congress.

The statement read in part, “Although, Hon. Ihedioha’s journey to the tribunal against Governor Okorocha will end up being an exercise in futility, it will help to let the world know who imported violence and intimidation into the 2015 governorship election in the state when the exhibits will be tendered.

“It will also reveal who benefited from his claimed partisanship of the state INEC and who actually was the brain behind the invidious malpractice in some Local Government Areas like Aboh Mbaise, Ahiazu Mbaise and Ezinihitte Mbaise”.

While urging Ihedioha not to work himself up on the fate of the PDP in Imo state, Okorocha added, “We also have our firm belief that Hon. Ihedioha didn’t go to the tribunal on the grounds that Governor Okorocha did not win his election resoundingly and convincingly too, considering the spread he had and his enviable popularity among the Imo Populace, or that Governor Okorocha would not have even beaten him in his ward, Mbutu or in Mbaise ,where he comes from if ballot boxes were not snatched and figures falsified, but Hon. Ihedioha wants to use the tribunal matter to keep the hope of the remaining members of the PDP in the state alive and to prevent them from defecting to APC as it is the case at the moment”.