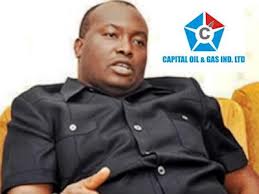 Managing Director of Capital Oil and Gas, Mr. Ifeanyi Ubah, said it is not too late for President Goodluck Jonathan to fully deregulate the country’s downstream petroleum industry.

Ubah, whose company released 13 million litres of petroleum products to assuage the pains of Nigerians while oil marketers went on strike, urged Jonathan to bequeath to Muhammadu Buhari, a regulated price regime.

The Nigerian National Petroleum Corporation (NNPC) in-house members of the Petroleum and Natural Gas Senior Staff Association of Nigeria (PENGASSAN) and National Union of Petroleum and Natural Gas Worker Association of Nigeria (NUPENG), had gone on strike in protest against the government’s recent transfer of operating rights of Oil Mining Leases (OMLs) of the Nigerian Petroleum Development Company (NPDC) to private companies.

“I felt I would be acting irresponsibly to watch Nigerians dying in hospitals, languishing in filling stations without buying the product and keep quiet. So I had an obligation as a Nigerian not to allow that continue, and I bet you that if I did not make that move, the strike would have been on today,” Ubah said.

“You can understand the extent and enormity of the crises when even banks threaten to close shop because they don’t have fuel to power their generators since the public power system has also crumbled. So, I felt it a duty as one who operates the largest fuel supply base in Nigeria to turn around the situation.

“By today, I am sure we have already achieved the 13 million litres or 400 truck-loads target and we have product in the jetty and will not stop pumping.

“I am assuring Nigerians that what we did on Sunday was not a flash in the pan but real action and resolve to make sure the scarcity is defeated.”

“In a few days, it would be over. That is why we call on the president to declare total deregulation even a day to his exit,” he added.

Ubah, an advocate of deregulation and removal of fuel subsidy, stated that it would be a great act of patriotism for Jonathan to declare total deregulation of petroleum pricing.

“I envisage a situation where oil would sell at about N85 for a litre when deregulated because that will encourage competition among operators and also create the incentive for local refining. When that is achieved, more jobs will come and the entire economy would be more robust and gain from the development,” he stated.