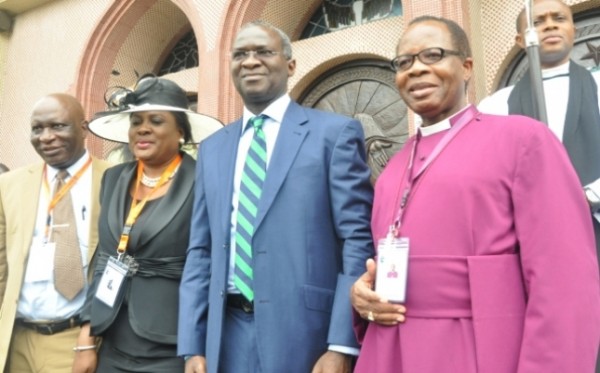 Governor Babatunde Fashola of Lagos State has advocated that the May 29 handover ceremony should be more focused on informing Nigerians about the direction the new government rather than the usual fanfare.

The governor explained that this is how inaugurations are conducted across the world.

Fashola said this while fielding questions from journalists at the third session of the 32nd Synod of the Diocese of Lagos (Anglican Communion) on Monday.

The governor, whose eight year tenure ends on May 29, added that the incoming political office holders would be made to declare their assets before taking the oath of office.

He said, “I think we should do what normal countries do as regards inauguration. There should not be too much fanfare about this. We should understand that the tenure of the current administration will end on the midnight of May 28.

“A new President and new government are in office subject to the constitutional requirement of Section 140 of the constitution to declare their assets and take their oath of office. So, essentially, what people see during the day is ceremonial.

“The law has taken its course at midnight. So, that is the most important thing. So, I hope at various state levels and national level, we will hear indicative directions about which way we are going (on inauguration day)”.

Diocesan Bishop of Lagos, Most. Rev. Ephraim Ademowo, in his remarks, commended Gov. Fashola for providing Lagos with quality leadership in the last eight years.

He urged President-elect Muhammadu Buhari to concentrate on the economy, tackling corruption and unemployment, reviving the educational system and infrastructure as well as curbing terrorism.

Ademowo added, “At the recent rebasing of the economy, Nigeria emerged as Africa’s largest economy with the 2013 GDP estimated at $502bn. Oil has been a dominant source of government revenue since the 1970s. The Nigerian economy has continued to grow at six to eight per cent per annum driven by growth in agriculture, telecommunications and other services.

“This growth has not translated into a significant decline in poverty levels – over 62 per cent of Nigeria’s 170 million people live in extreme poverty”.