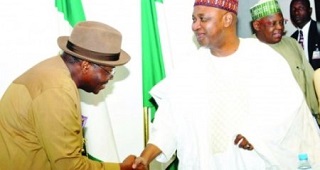 The Federal Government on Friday in Abuja raised alarm over dwindling and epileptic electricity supply across the country.

The Permanent Secretary, Ministry of Power, Mr Godknows Igali, made this known after a meeting with Vice-President Namadi Sambo to State House correspondents in Abuja.

Igali, and Prof. Chinedu Nebo, Minister of Power, had briefed Sambo on the state of power generation, transmission and distribution in the country.

The workers were protesting the transfer of the operatorship of the Oil Mining Lease (OML) 42 to two indigenous companies, claiming the move would affect the fortunes of NPDC and its staff.

“With the strike which has gone on for one or two days there is dramatic turn as of this afternoon we have gone down for the all-time low to 1,327 megawatts.

He said as at 12 noon May 22, 2015, Utorogu, CHEVRON ORE DO, OB EN gas plants were all shutdown while UGHELI and CNL ESCRAVOS were already isolated.

He said, “on the eastern axis Shell Gas, ALAKIRI has also been shut down. This has led to the several power plants being stranded and shutdown.

According to him, besides, pipeline vandalism which has continued to have very negative impact on the power supply situation in the country, the ongoing strike by the labour unions in the oil and gas sector has added additional toll.

“The overall effect is that power supply which had started picking up steadily since the beginning of the week following repairs of various vandalised portions of the ELP Line and the Trans-Forcados Gas Pipelines, has fallen to all-time-unprecedented low of 1,327m was at 1.00 p.m. May22, 2015.

He, therefore, warned that “situation could get worse if the strike continues”.

Igali expressed the hope that the ongoing discussion between the Federal Ministry of Petroleum Resources, the Nigerian National Petroleum Corporation and, the labour unions, would end amicably.

“Indeed, it is hoped the labour unions will help restore supply of gas to the power plants even while negotiation are ongoing”. (NAN)