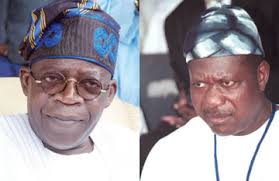 The Senate Minority Leader and one of the leading contenders for the Senate Presidency, Senator George Akume, on Friday disagreed with the Pioneer National Chairman of the All Progressives Congress, Chief Bisi Akande and a leader of the party, Asiwaju Bola Tinubu, over their declaration that zoning arrangement won’t be used in sharing of political positions in the National Assembly.

Akume, who spoke with journalists in his Abuja residence on Friday evening, maintained that the party, before now, had adopted a zoning arrangement which favoured the emergence of the next Senate President from the North Central, being his geopolitical zone.

It would be recalled Akande had, earlier this week, said the party would not employ the use of zoning to determine the next senate president and that anybody was free to vie for the position.

In the same vein, Tinubu had told journalists on Thursday in Abuja that zoning will not be used to compromise the quality of leadership for the National Assembly, adding that the party had decided to allow all those interested in the Speakership of the House of Representatives and President of the Senate to contest.

But Akume insisted that zoning was part and parcel of the politics of Nigeria, arguing that Dr. Goodluck Jonathan became the President of Nigeria as a result of zoning.

He said, “Even if zoning is not explicitly stated in the Constitution, there is always this letting to understanding that there must be fairness and balance in the occupation of strategic positions. We should not throw away zoning.

“In every zone, there are capable Nigerians that will hold their own in every endeavour. So, basically zoning is acceptable to me because it ensures stability. I have not heard from the party that they have jettisoned zoning.

“I remember, the last meeting we had, there was this issue that it has been zoned to North Central. I do not know it has been taken away because the party has not said they are taking it away but all I want to say is that the party made a comment on it.

“I am a faithful party man. I was part of the team that negotiated the merger of this party and I am also in the privilege position to talk about the dynamism of APC”.

On the argument that the North-Central, specifically Benue State, had occupied the Senate Presidency since 2007, Akume said there was nothing wrong with the trend even as he argued that the North-West, has also, always produced the President of the country whenever it was the turn of the North.