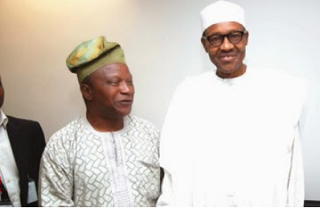 Nigeria’s president-elect, Muhammadu Buhari, on Tuesday met with one of the journalists jailed under the draconian Decree 4 in 1984 when he was a military Head of State.

The journalist, Tunde Thompson, who alongside his colleague, Nduka Iraboh, at the Guardian newspaper, became one of the faces of the Buhari military junta’s iron-fisted rule, had prior to the March 28 polls, said that he had forgiven the then All Progressives Congress candidate. He later worked as part of the former head of state’s media team.

Hosting members of his Media Team and Social Media Influencers at the Defence House, Abuja on Tuesday, the president-elect cracked jokes with Thompson and praised him for rising above his jail experience to forgive and support his presidential bid.

He also reminded Thompson that what happened under his military regime was one of the challenges of that period.

The president-elect also commended members of his campaign media team led by the indefatigable Shehu Garba, for running a very “decent media campaign” despite the vigorous hate campaigns mounted against him by the Peoples Democratic Party.

“I want to commend you especially for two things. First, is the decent media campaign you conducted. Despite the PDP’s dirty tactics, you stayed focused on issues and avoided the temptation to sling mud”.

Mr. Buhari also commended the Independent National Electoral Commission, INEC, for deploying technology as part of the process of the last election with the use of PVC and Card Readers.

“We must commend Nigerians who believe in our message of change and INEC for introducing Card Readers and PVC”, he said.

“All elected leaders will now know that the voter is the king. Nigerians now have more faith in our elections because their votes will count.

“If not for PVC and Card Readers the PDP as usual would have written the results and asked losers to go to court.

“How can people who are struggling to survive go to Court and get money to pay the SANs of this world. We must thank God for the success of this election”, President-Buhari added.