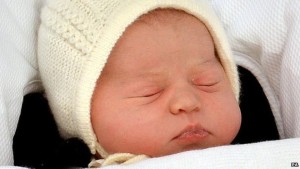 The Queen has met her new great-granddaughter. The Queen is believed to have arrived in London from her Sandringham estate in Norfolk. The meeting was the first time a serving sovereign had met a great-granddaughter born in direct succession on the male line since Queen Victoria met George VI’s sister Princess Mary, who was born 118 years ago in 1897. BBC was there:

The princess has had several other visitors, including the Prince of Wales and Duchess of Cornwall who spent more than an hour with their new granddaughter on Sunday.

The princess, who is fourth in line to the throne, was born on Saturday at London’s St Mary’s Hospital, weighing 8lbs 3oz (3.7kg). Kensington Palace revealed on Monday that she had been named Charlotte Elizabeth Diana. The Duke and Duchess of Cambridge have formally registered the birth of their second child.

The Duke of Cambridge signed the birth register at Kensington Palace on Tuesday, witnessed by a registrar from Westminster Register Office. The document gives the date and place of Princess Charlotte’s birth, and her full name as Her Royal Highness Princess Charlotte Elizabeth Diana of Cambridge.