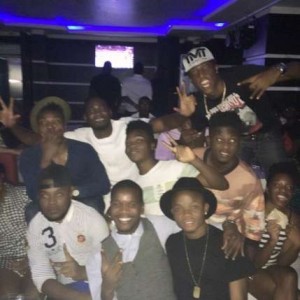 Tunji Teebillz Balogun is among the very few gamblers who isn’t happy about the Mayweather win.

TeeBillz has vowed not to watch any boxing match again after losing an undisclosed amount of money to Cool FM OAP and rapper, N6.

The 323 Entertainment boss, who had placed a bet on the historic boxing match between Manny Pacquiao and Floyd Mayweather, lost to N6 after the duo watched the match at Club 57, the highbrow night club on Victoria Island, Lagos.

“I’m sorry to say Fuck Boxing till I die…. I will never watch another boxing match. I see it’s all politics now! I’m so glad I watched that shit for free #TeamPacMan till I die…Thank you DSTV!” Teebillz wrote on his Instagram page.

Continuing, he wrote further, ‘On some real shit tough! Tell me how many punches Bitch ass @mayweather landed on #pacman ? Fuck #TMT 4real on everything I love cos I’m sadden to my soul!’

After the match, Teebillz fulfilled his part of the bet and N6 took to his Instagram page to announce his victory.

‘MASSIVE SHOUTOUTS TO @teebillz323 HE SUPPORTED MANNY PACQUIAO AND WE BET A HUGE SOME MONEY ON THE FIGHT AND LIKE A GENTLEMAN HE PAID UP LOVE TO MY BRO @teknoofficial THE ONLY MONEY TEAM SUPPORTER WITH ME TONITE AT @Club57 cc @floydmayweather WELL FOUGHT CHAMP,‘ N6 wrote.

In his reply to N6, ‘Bro no hard feelings? y’all are my broo though but if u come at me on this bitch shit cos I remembered when @n6oflife and you know who gave up!‘