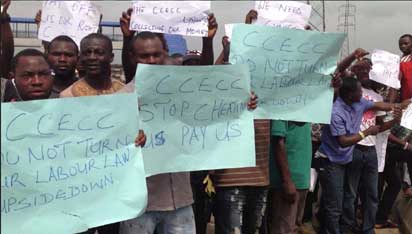 The aggrieved workers, who carried placards, chanted protest songs in front of the CCECC office at Majidun area of Ikorodu, Lagos, as early as 10:00 am, yesterday.

“CCECC stop cheating us, pay us our pay-offs,” “CCECC, we are not slaves, pay us,” and “We need our pay-off, it is our right,” read some of the placards.

According to Vanguard, one of the affected workers, Thaddus Akaa, said the protest was to seek their due compensations from CCECC, stressing that workers had been tolerating the alleged abuse because of fear of being sacked.

“I started working with them since, 2011 and we worked across Nigeria tirelessly from Sunday to Monday without any break till the end of the month; no weekend, no holidays.

“They called us all sorts of names, treat us like slaves and drove many of us out of the company without any notice or compensation. Most of us have been sent out without any plan of payment and our fear is that the project is nearing completion and it will be handed over to Lagos State government on May 13 without them giving us our pay-offs,” Akaa lamented.

Also speaking to Vanguard, a forklift operator, Ope Adako said the workers had to protest in order to let the world know how CCECC had been treating Nigerians.

“They have no respect for their labour; we beg our government to quickly come to our aid.

“In times of redundancy, it is understandable that companies can lay off workers, but compensations must be given to such staff.

“Most of those they have sacked have not received any word on how the company intends to compensate them. The company’s management ignored us totally and they have turned our union to a mere puppet, who speaks for the management’s cause,” he added.

Adako also said that many of his colleagues, who had been working with CCECC for over 10 years were among those who were indiscriminately laid-off by the company.