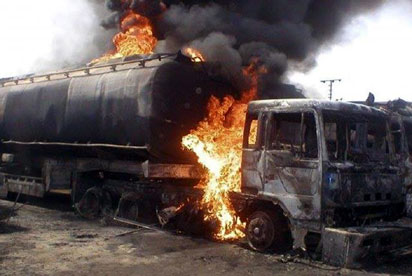 Human rights lawyer and Senior Advocate of Nigeria, Mr. Femi Falana, has asked the Corps Marshall of the Federal Road Safety Corps, Mr. Boboye Oyeyemi, to release to him the report of the investigation on the tragic accident in Onitsha, Anambra State on May 31, 2015.

The accident claimed the lives of 69 persons while 12 buses got burnt in the inferno.

The lawyer, who made request on the strength of the Freedom of Information Act, 2011, said he needed the information to enable him to press for dependents of victims who died in the accident and those injured.

The letter stated, “In view of the fact that the Onitsha tragedy occurred due to brake failure as the vehicle was not serviced, we are compelled to request for the prosecution of the owner of the tanker involved in the accident.

“Since the owner of the tanker is vicariously liable for the negligence of the driver, we have decided to press for monetary compensation- which is legally payable to each of the victims and the dependents of all those who lost their lives in the inferno.

“In order to follow up the matter, we hereby request for a copy of the report of the investigation conducted into the accident by the FRSC.

“As this request is made pursuant to the Freedom of Information Act, 2011, you are required to furnish us with the report within seven days of the receipt of this letter.

“However, if you fail or refuse to accede to our request, we shall not hesitate to pray the Federal High Court for an order of mandamus to compel you to release the report”.

Falana, who expressed concern over accidents that have occurred after the Onitsha incident, said the FRSC must take drastic steps to stop the “carnage” on the roads.

He said apart from its planned national summit, the corps must be prepared to prosecute reckless drivers.

He said, “About a month ago, a run-away oil tanker truck exploded in a crowded bus station in Onitsha, Anambra State, and set ablaze 12 buses carrying passengers and killing 69 people while about 30 other victims were hospitalised with severe burns. From several media reports, the truck was barrelling down the hill when the brakes failed and it veered off the road and rammed into the crowded bus station before it exploded”.