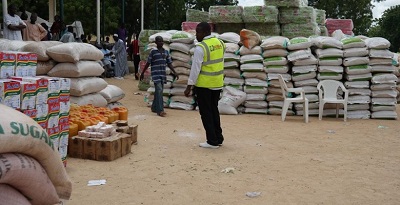 The Peoples Democratic Party has called on the National Emergency Management Authority to donate relief materials, especially food, to workers in Osun State because of the non-payment of their salaries for the past seven months.

The spokesman for Osun PDP, Mr. Diran Odeyemi, made the appeal in a statement in Osogbo, the state capital, on Thursday.

The statement, which commended the Christian Association of Nigeria for rallying support for the workers, however, pointed out that the mobilisation of aid for the state workers could not be left for the religious organization alone to bear.

The PDP also directed its members to begin to bring foodstuff to the party’s secretariats in all the local government areas in the state for onward distribution to the workers.

It said, “The situation in the state requires much more than what religious bodies can cope with. We are calling on the National Emergency Management Authority, Red Cross Society and well- meaning Nigerians to come to the aid of the workers in the state.

“The situation of unpaid salaries is so bad that many of those in the employment of government have now resulted to begging to feed their family while many have attempted to hang themselves.

“On Wednesday, a man slumped and died in broad daylight at the popular Olaiya Junction, Osogbo, after begging for money to buy drug, albeit unsuccessfully from the traders around and the passersby.

“The man openly shouted that his relatives that usually give him money to buy drugs have not been paid salaries for months. The sad aspect of the story is that the corpse was left at the spot where he foamed and bled through the mouth for a day before his remains was evacuated.

“We also have it on good authority that many of these helpless workers have been evicted from their rented apartment while many others are said to be considering suicide”.