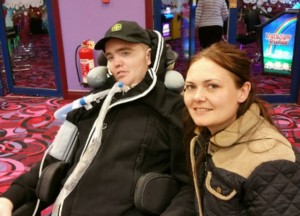 A young man is lucky to be alive after surgeons managed to reattach his head following a horrific car accident, doctors in the United Kingdom said. Scoop reports:

The 29-year-old man of Chester-le-Street, has overcome a seemingly unsurvivable injury after his head was separated from his spine in a car accident. The car driven by Tony Cowan, spiraled out of control after hitting a speed bump. Paramedics found the car wrapped around a telephone pole, and the driver without a heartbeat.

He was rushed to a nearby hospital, where doctors said that he had no chance of survival. His head was detached from his spine and muscle tissue kept his head from falling off, Cowan’s mother Pepsi Cowan said. Doctors told the family that Tony Cowan suffered a neck fracture and complete spinal cord injury. The hospital staff were under the impression that he had no brain activity and advised the family to say their goodbyes.

Then Cowan opened his eyes. Doctors were surprised and shocked. Doctors at the Royal Victoria Infirmary reattached the broken skull to his spine with the help of metal plates and screws. After spending months in intensive care, Tony Cowan recovered some facial movements and learned to communicate through facial expressions and a computer. He is eager to leave the hospital and go home with his partner, 28-year-old Karen Dawson.