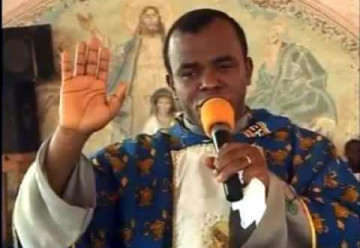 President Muhammadu Buhari on Thursday showered praises on the Enugu-based Catholic Priest of Adoration Ministry, Rev. Fr. Ejike Mbaka on the occasion of his 20th year of priesthood.

In a statement by his Senior Special Assistant on Media and Publicity, Garba Shehu, the president commended the cleric for what he described as his “extraordinary intrepidity and remarkable patriotism”.

He described Mbaka as a great priest, who is not afraid to speak truth, even at the cost of his own life or being hated by those in power.

The president said the priest is a remarkable example that religious leaders are the conscience and moral compass of the society.

According to the statement, Mbaka rose to the occasion to add his voice in support of good governance and identify with ordinary Nigerians in the face of despair and uncertain future.

“Though honest opinions attract hostility from leaders detached from reality, history would be kind to Father Mbaka for courageously speaking truth to power, even at great risks”, the statement said.

Buhari, who said he was overwhelmed by Mbaka’s sincerity and patriotism, prayed to God to grant the priest more good health, long life and wisdom in the service of humanity.

The Catholic priest came under fire before the presidential election after he “suddenly” switched from supporting then President Goodluck Jonathan’s re-election bid to Buhari.