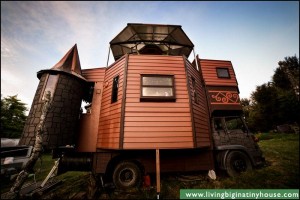 Justin and Jola Siezen are an unconventional family. They have adopted a traveling lifestyle and are constantly on the move with their baby son Piko, in a mobile home. But that’s no ordinary mobile home – it’s a magical truck that transforms into a fantasy castle, complete with a kitchen, bedroom, turret bathrooms, and a rooftop bathtub! Oddity Central has more:

Justin and Jola started off with the idea of having a house inside a truck that would meet their minimum requirements. But their project eventually became more than that.

It became a permanent home, with personal touches and smart designs that make the most of limited space. The couple love to cook, so they have a huge kitchen equipped with a full size oven and other appliances.

Two turrets open out at the back of the van, each featuring a composting toilet, a functioning shower and washing machine. Water is heated by a combination of solar panels, gas, and a fireplace. Rainwater is captured and stored on the roof, which also serves as a beautiful balcony complete with a hammock and bathtub. They literally have everything they need in the small truck, even an old sewing machine.