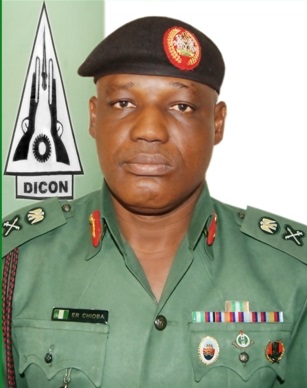 Two serving generals of the Nigerian Army are presently at daggers drawn over the Defence Industries Corporation of Nigeria, DICON, Kaduna.
The officers are outgoing Director-General of DICON, Major General E.R. Chioba and his successor, Brigadier General Augustine Odidi.
It was learnt that Chioba has refused to hand over to Odidi, who was appointed to take over as director-general of the corporation.
Sources said that a mild drama played out when the newly appointed DG went to the Kaduna headquarters of DICON to take over from Major General Chioba, who has been heading the corporation since February 2013 but met the shock of his life as the outgoing DG refused to hand over.
While some sources said Chioba’s refusal to hand over to the new DG was based on a general order to put on hold all recent postings done in the Nigerian Army on the eve of the exit of the former Chief of Army Staff, COAS, Lieutenant General Kenneth Minimah, other sources claim that the outgoing DG may be afraid of handing over to Odidi, who is reported to have a reputation for due process.
Odidi was appointed as the new DG by President Muhammadu Buhari in a letter signed by the Military Secretary, Army (MSA) Major General I.I. Abbas and was expected to resume duty on July 20, 2015.
Born on March 4, 1961 in Kano, but hails from Agenebode in Etsako East Local Government of Edo State, Odidi joined the prestigious Nigerian Defence Academy (NDA), Kaduna, as a member of the 27th Regular Combatant Course in 1980 and won the best graduating Army Cadet Silver Medal which was awarded to him by the then President Shehu Shagari. He was commissioned as second lieutenant and posted as member of the Nigerian Army Electrical and Mechanical Corps (NAEME).
Before his appointment, Odidi who was promoted Brigadier General on 4 January 2008, was the deputy director, Production, Department of Logistics, Defence Headquarters Abuja.
DICON was established in 1964 to produce small arms and ammunition for the use of the Nigerian Army and other security agencies. It also uses its excess capacity to produce machinery spare parts for industries and other products for civilian use.