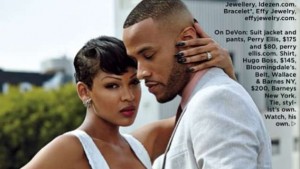 Husband to superstar Hollywood actress, Meagan Good, DeVon Franklin has come out again to defend her against  her numerous critics on her very revealing outfits to public events.

According to Essence magazine, the Think Like A Man star, who got married to the Seventh Day Adventist minister back in 2012, has been criticized by people who expected her to have overhauled her wardrobe once she married.

Others blame her husband for not controlling what his wife puts on.

Explaining at the Essence Festival empowerment panel on love and marriage in New Orleans on July 5, Franklin said: ”I don’t own her [and] she doesn’t own me. We are together and I respect whatever she chooses to put on. When I married her, I said, ‘I accept you for who you are. And whatever you choose to wear, that is your right.”’

He added that : ”So many people try to live by a label, but that’s not the box God put us in. Who we are is not defined by a box. When I live by your expectations of what I should do, then I limit who I am and then I become depressed because I can’t be my true self.”.

At the BET Award 2013, Good wore a stunning and very revealing low-cut dress which sparked an outcry on social media.

”I saw her before she walked out, and I said, ‘Amen, praise the Lord. The only ones with the guns out were those that read the same word that says, ‘Love your neighbor as yourself.’ But the love was not there. I don’t have an issue [with her clothes]. It’s not about the dress; it’s about her heart. And I know her heart is amazing, that’s why I love her,” he jokingly told ESSENCE Festival attendees. 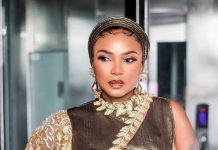