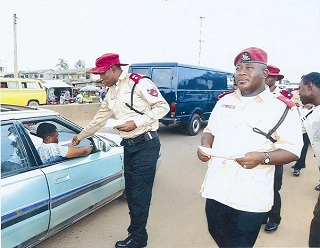 Road crashes in the country have been reduced by 15 per cent since the beginning of 2015, the Federal Road Safety Corps, FRSC, said on Thursday.

Speaking at a corps commanding officers retreat in Abuja, the corps marshal, Boboye Oyeyemi, said the FRSC has been able to achieve a relatively reduced road crash compared to the past year.

“Well, so far so good, except those crashes involving the tankers and trailers in the first week of June,” he said.

The corps marshal said the reduction in road crashes this year means the FRSC has been able to stay on course in achieving its 2015 goals in just six months.

He, however, lamented that the recent tanker crashes in some parts of the country proved to be a terrible period for the corps which made the FRSC fast-track on policies and implementations already slated out to curb more of such crashes.

“I can say we can see some relative improvement”, Mr. Oyeyemi. “We are about commencing the training for the tanker/trailer drivers and we are providing four centres now for us to have commercial drivers’ licence centres for the NUPENG-PTD drivers.

“Sequel to the drivers training will be medical and eye test to ensure that these tanker/trailer drivers are fit to be on the road”.

Mr. Oyeyemi said most state governors including Anambra, Kaduna, Delta, Lagos among others have demonstrated their support for the FRSC in reducing road crashes across Nigerian states.

“Consequently, September 1 has been chosen as the deadline for all commercial vehicles to have the gadget, Speed Limit Devices installed in them, failure of which will attract sanctions by men of the FRSC as well as other law enforcement agencies”, he said.

The corps marshal also said the FRSC was strengthening various policies and programmes of the commission with a view to enhance staff productivity.

Also, speaking to journalists, the zonal commander Lagos and Ogun states, Nsebong Charles Akpabio, decried the attitude of motorists on the roads.

He said, “Even though we have bad roads, how bad or how well we use these roads can either lead to reduction or an increase in road crashes”.

According to the zonal commander, the retreat was an avenue for the sector and zonal commanders to review activities in the past three months, pointing out that there would be awards for command and departments that have excelled in their activities.

Mr. Akpabio said these awards would help set standards and encourage others in order to add value to the corps effort to reduce crashes on Nigerian roads.

He also encouraged change of driving attitudes by motorists and also called on all corps command to work towards enforcing zero tolerance to road crashes.

“My message to motorists in general is that road crashes does not respect anyone; nobody is immune to these crashes; so we are determined, more than ever before to ensure compliance to rules and regulations of the road”, Mr. Akpabio said.