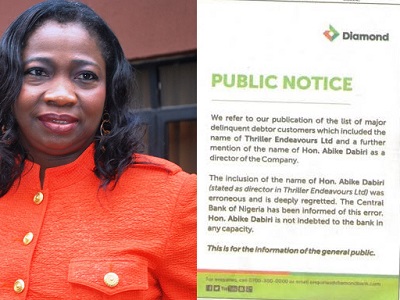 Diamond Bank Plc has apologized to former member of the House of Representatives, Hon. Abike Dabiri for listing her among its debtors.
The former lawmaker was listed as Director in Thriller Endeavours Ltd, which is indebted to the bank to the tune of N122 million.
But Mrs. Dabiri denied being a director in the said company or owing the bank and any other financial institution for that matter.
Following the “irreparable damage” and embarrassment, claims that she is a debtor caused her, Mrs. Dabiri filed a suit before the Lagos State High Court, Igbosere, asking the court to compel the bank to publicly apologize and also pay damages running to N500 million.
In response, Diamond Bank took out adverts in two national dailies on Friday, apologizing for erroneously including her name as a director in a company owing their bank.
The apology reads:
We refer to our publication of the list of major delinquent debtor customers which included the name of Thriller Endeavours Ltd and a further mention of the name of Hon. Abike Dabiri as a director of the Company.
The inclusion of the name of Hon. Abike Dabiri (stated as director in Thriller Endeavours Ltd) was erroneous and is deeply regretted.
The Central Bank of Nigeria has been informed of this error. Hon. Abike Dabiri is not indebted to the bank in any capacity.