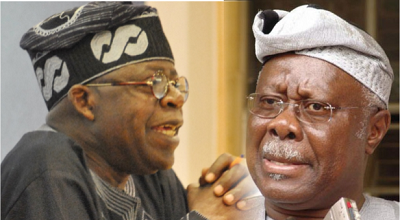 A chieftain of the Peoples Democratic Party, Chief Bode George, has warned the National Leader of the All Progressives Congress, Asiwaju Bola Tinubu, to steer clear from the process towards the selection of the next Ooni of Ife.
Following the passage of Oba Okunade Sijuwade, the ruling houses in Ife, Osun State, will meet as part of the process of picking a new Ooni.
However, George, who is the Atona Oodua of Yoruba land, during an interview on Monday, warned the former Lagos State governor against using his close relationship with the Osun State Governor, Mr. Rauf Aregbesola, to manipulate the process.
According to the PDP chieftain, Tinubu ought to have learnt his lesson from the recent National Assembly crisis.
He said, “He will be making attempts to manipulate the process. They will do politics with it but it will blow up. They should allow the kingmakers to do their work. If he manipulates the process, he will create a huge problem in Yoruba land.
“Let him allow the kingmakers do their job. He should not set Yoruba land on fire. Aregbesola should, instead, focus on paying salaries”.
When asked to react to the late Ooni’s closeness to former President Goodluck Jonathan, George said it had nothing to do with the process of the emergence of a king, which is a sacred process.
He also said the politics of Ife was not like that of Lagos, hence, Tinubu should not set a bad precedence in Yoruba land.
“He (Tinubu) tried it at the National Assembly but came back with a slap. He should, therefore, not go out of his way to bring in an APC-inclined man as the next Ooni. We want an Ooni that will be fair and not connected with all these politicians.
“We need an experienced person. We want the person that the kingmakers will approve of. As the Atona Oodua, I know how these things are done”, he said.
Speaking on the recent political appointments by President Muhammadu Buhari, George backed calls for the South-East to produce the next Secretary to the Government of the Federation.
He said doing otherwise would make the people of the geopolitical zone feel left out.