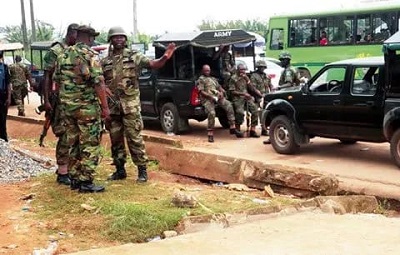 The 31 Artillery Brigade, Minna, said it had arrested a suspected cattle rustler and recovered 97 cows and 41 sheep in Sarkin Pawa, Munya Local Government Area of Niger.
Capt. Agwu Njideka, Assistant Director, Army Public Relations of the Nigerian Army, Minna, said this while briefing newsmen in Minna on Saturday.
“A total of 97 cows and 41 sheep were recovered during the operation by the soldiers. Some of the rustlers ran away on sighting the soldiers”, she said.
Njideka said the suspect, Abubakar Hassan, was arrested last Thursday in an operation led by Lt.Col. Adamu Yakubu, Commanding Officer, 313 Artillery Regiment, Minna.
She said the army authorities had handed the suspect and the livestock to the Chairman of the local government council, in the presence of the DPO Sarkin Pawa Division, the Council Secretary and Village Head of Zazzaga community in the area.
She said the operation to get rid of criminals in the area, was ongoing, and warned that the Brigade, under the leadership of Brig.-Gen. Baba Ibrahim, would not tolerate criminal acts in the area.
“I want to categorically state that the Brigade will not condone any form of banditry, cattle rustling, kidnapping, rape or any form of criminality in its area of responsibility”, she said.
She advised members of the public to go about their normal businesses without fear of intimidation.
Njideka urged any person with useful information that could lead to the arrest of the suspected criminals that fled, to report to the nearest security agency.