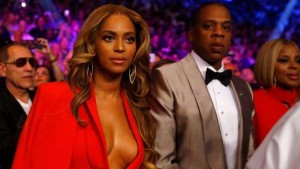 New reports are suggesting that queen Beyonce is planning to end her 7 year marriage to hip hop mogul, Jay Z!

According to RadarOnline, Jay Z’s failure to appear at the Made In America Festival during Beyonce’s performance of their duet, ‘Drunk In-Love’, hit song got fans speculating that there’s trouble in paradise.

Reports say that Jay Z was spotted dancing and singing to Bey’s songs as she rocked the stage in front of screaming fans; a source tells In Touch magazine that “It’s dead! Bey is sick of keeping up the ruse of happiness, and she’s done.”

The mag claims it’s like Bey is afraid of being asked questions about her marriage, hence hasn’t done any interview in the past 18 months; right before the notorious elevator outburst between Solange and Jay in May.

“It’s like she’s on lockdown and doesn’t want to be asked about her marriage or why she and Jay haven’t had another child after Blue Ivy. But in private, she’s already told friends and family that she’s moving forward with her life. She’ll soon make a public announcement that their marriage is over,” claims the source.

Rumors have swirled for years that Jay Z has been cheating on his wife with everyone from Rihanna, Rita Ora to fashion designer Rachel Roy; however the source claims the couple’s pre-MTV VMAs fight could end their union.

“Earlier this summer, Bey found some suspicious texts on Jay’s phone that led her to believe he was having a secret flirtatious communication with one of his [female] proteges. Beyonce’s been on high alert for some time and took her new suspicions to one of Jay Z’s right hand men, who told her she needed to take that up with her husband. To Bey, that was a confirmation of her worst suspicions and fears,” a source told In Touch.

Neither Jay Z nor Beyonce has commented on these allegations, stay tuned to this page for updates!