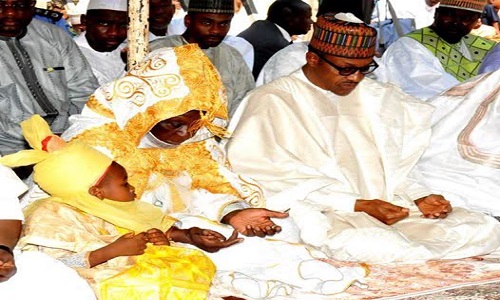 The prayer, which held amid tight security, was led by the chief Imam of Daura, Sheikh Safiyanu Yusuf, at Kofar-Arewa Eid ground around 9.30 a.m.

The imam, in his sermon, stressed the importance of sacrifice in Islam, adding that the sacrifice could be made using a ram, sheep, goat, cow or camel.

He also said that the meat could be given to the needy and even non-Muslims.

The imam urged people to continue to pray to the almighty Allah to give the country peace, unity and stability.

The Emir of Daura, Alhaji Umar Farouq, directed all mosques in the emirate to organise special prayers for peace and stability in the nation even as he prayed to Allah to continue to guide President Buhari to be able to lead the country aright.

“We need to intensify prayer for peace and stability in the country, because nothing can be achieved without peace”, he said.

Some of the dignitaries that observed the Eid prayer include the Director-General of the Department of Security Service (DSS), Alhaji Lawal Musa Daura, and other prominent sons of the emirate including religious and traditional leaders among others.

The News Agency of Nigeria (NAN) reports that the president and the emir slaughtered their rams after the prayer at the Eid ground.