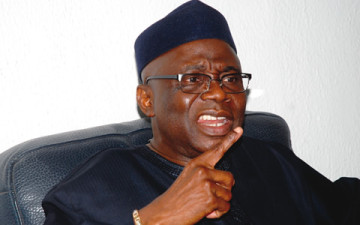 Controversial televangelist and founder, Latter Rain Assembly church, Lagos, Pastor Tunde Bakare, has disclosed details of his meetings with former President Goodluck Jonathan, and what he benefited from the former leader while he was in office.

Mr. Bakare, who was President Muhammadu Buhari’s running mate in the 2011 presidential election on the platform of the defunct Congress for Progressive Change, CPC, said he wrote four-point letter to Mr. Jonathan, calling his attention to the level of impunity in his administration.

Giving details of what he benefitted from the immediate past president in an interview with Abuja-based magazine, THE INTERVIEW, the pastor said, “Let everyone declare what he has received. I can tell you what I received. I took two people there one day and he invited us to dinner. I had a bad sore throat that day, so I took a pass regarding the dinner.

“Another day, I took a couple there and I took a cup of tea. I told you about the $50,000 which I refused, but that was Orubebe. He sent me a cow at Christmas – which I gave the staff to kill – and a hamper through our pastor in Abuja, but I told him to keep it”.

According to Bakare, at a point, Jonathan offered to give him “something”, which he declined and requested for a pen instead.

“Finally, when the opportunity came and he (Jonathan) said, ‘I will like to give you something’. I [then] said ‘I like pens: so if you must give me anything, let it be a pen, so that I can show it to my people and say ‘the president gave me a pen’”, he disclosed.

The Pentecostal pastor recalled one day, after a meeting with the ex-president, a former minister in charge of Niger Delta Affairs, Godsday Orubebe, rushed to offer him $50,000 for “transport”, an offer he said he turned down.

“When we were leaving, Orubebe ran after me and offered me $50,000 for my transport. I said, ‘Haba, take your money, I am not for sale’. We said goodbye to him and the rest is history”, Mr. Bakare said.

Giving further insight into his private meetings with the former president, Mr. Bakare said, “When he (Jonathan) became president, I said to him, ‘the things we marched and protested against, you are now perpetrating them – the same impunity’”.

“I gave him four points in writing. Before we left Lagos, I gave a copy to Pastor Adeboye and another to General Alani Akinrinade. I said, ‘we are going to say goodbye to this man’ because if a man cannot keep his own side of the bargain, because if you got here by the grace of God and not because of any pedigree and, within 10 years, had become the president of Nigeria.

“God has brought you into the kingdom for such a time as this, so you cannot begin to commit the same impunity”, he said.

Mr. Bakare recalled yet another interesting meeting with the former president, where he (Jonathan) told him that he needed someone to tell him the truth.

“He reached out to me later and said, ‘look, let’s put that behind us; Nigeria’s situation is critical’”.

“Before I went, I called General Buhari and said ‘this man invited me, I don’t know what for.’ When I got there, he said he needed someone who could tell him the truth always. I said, ‘if that is what you want, you have me at your side’”, he said.

Bakare’s claim above confirms the widely held notion that the former president surrounded himself with sycophants and self-serving individuals who shielded him from the true situation of things happening in the country.

Mr. Bakare therefore challenged religious leaders to declare what they received Mr. Jonathan, saying the clergy did not tell the former president the truth because of what they benefitted from him.

“However, you see, Christian leaders benefitted tremendously from his administration in terms of licenses and waivers. The thing is, when you allow those in power to get you into any compromise, speaking to them will be very difficult.

“I don’t know if any of those allegations were true, but I have seen enough to begin to think that they were not able to use our overwhelming influence. If you have benefitted from evil, you cannot talk about it, nor criticize it. Let everyone declare what he has received”, Mr. Bakare said in the magazine interview.