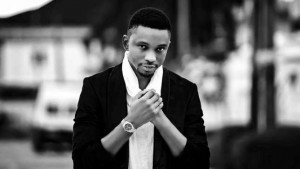 Upcoming singer, Tolu is back with a new track, ”Ifemi” – an R&B track which we can roughly translate as My love is in my heart and features the grand Don Jazzy.

Despite singing about love, the singer has admitted he’s still single and isn’t planning on ‘mingling anytime soon’.

In an interview with The Beat 99.9 FM in Lagos on September 4, the one-time Project Fame contestant told hosts Olisa Adibua and Maria he’s waiting for the right woman to come by… but for now, he’s dating his music.

“No, I’m not in a relationship,” Tolu responds to questions about his relationship status, adding, “I haven’t seen or met the right one yet.”

When asked to describe his ideal woman, the Trey Songz look-alike responded: “A woman with a dream… A woman who does her own thing.”

Specifying exactly what he’s looking for, the singer went on to say, “She has to be beautiful, loves God, educated, articulated, fashionable and smells good.” (Please where is this lady?)

Tolu is signed to Alyhiils Records and is best known for his incredible vocal range and is the first ever reality star to work with Marvin Record boss, Don Jazzy!