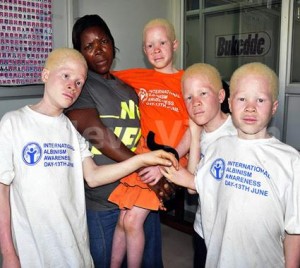 Salongo Kawuki Bwogere abandoned his wife, 35-year-old Faridah Nantumbwe and his children after she gave birth to the fourth albino child two years ago. He told his wife that in their clan they did not produce albinos, whom he described as a curse. He also barred his wife from cultivating on their land. Nantumbwe, now resident in Mugongo, Uganda said she used to live with her husband at Kirume village Gombolola Kasambya in Mubende district where they had their children.

According to Scoop, she narrated that after they had the fourth child her husband chased her and vowed to kill her and the children. “Although he decided to chase me away, Bwogere never provided me with transport. He just told me to find my way out of his house.

As a non-stipendiary, I had to appeal to people of good heart to bail me out of my burden of giving birth to albinos. However, through thick and thin I managed to get enough money for transport to take me to my home at Mugongo where I now live with my children,” Despite her ordeal, Nantumbwe has vowed not to abandon her children like her husband did.

She is currently seeking financial and any other assistance from people of good will, to raise her children. “After all they are human beings like other children who are not albinos”. Faridah gave birth to her first child, Ivan Ssewagudde at the age of 20. She said she was shocked to see that she had given birth to a ‘white’ child and so was her husband, little did she know what lay ahead.