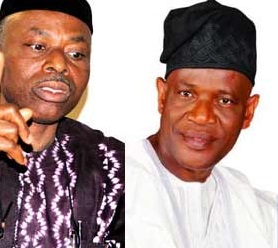 A chieftain of the All Progressives Congress in Ondo State, Chief Olusola Oke, has advised the state governor, Dr. Olusegun Mimiko to judiciously utilize the N41 billion received from the Federal Government as bailout for payment of workers’ outstanding salaries and for developmental projects in the state.

Oke, who was the Peoples Democratic Party’s national legal adviser before he defected to the APC shortly after the presidential election in March, also called on all well-meaning citizens of the state to advise Governor Mimiko on the proper use of the bailout.

In a statement issued on Friday by his media aide, Mr. Rotimi Ogunleye, the former candidate of the PDP in the October 2012 governorship poll in the state, said, “Now that huge resources will accrue to the coffers of the state, it will serve the purpose of posterity if the fund is used to defray all the arrears of workers’ salaries, invested in income generating and social service delivery assets and channeled to projects that have long standing economic benefits for the state”.

The statement added, “With the benefit of hindsight, we hope the governor will by now appreciate the need to invest public fund in those social amenities and economic assets such as Owena Dam, Olokola Free Trade Zone, Cassava Processing Industry, Okitipupa, Idanre lnternational Golf Centre and Alfa 3D Company that Mimiko abandoned.

“These projects have the capacity to provide jobs and impact greatly on the economy of the people of the state if completed. For instance, Owena Dam, if it was not abandoned, would have provided water for eight local government areas, thereby sparing government the cost of bore-hole drilling and endless maintenance cost on them. This would have also reduced the burden of the people in the eight local government areas of the state”.

While commending President Muhammadu Buhari for releasing the bailout, Mr. Oke said “the bailout approved by Mr. President and ready for collection is in the interest of Ondo State workers and our people in general”.