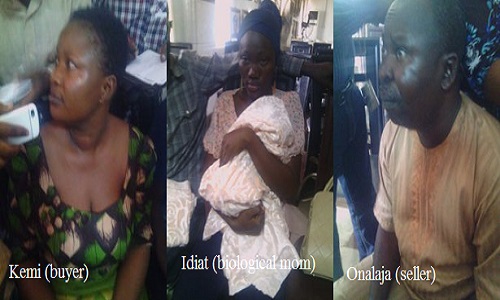 The Lagos State Police Command has arrested a self-styled doctor, Olawale Onalaja, for allegedly selling a week-old baby without the mother’s consent.

Also in police net are the couple – Dele and Oluwakemi Ayangbile – who took the baby after depositing N136,000.

The suspects’ shady transaction was exposed after the couple’s landlady at Mile 12 discovered that the woman had a new born baby without being pregnant.

The surprised landlady was said to have notified the Ketu Police Division of the suspicious presence of a new born baby in the couple’s home.

Following the police’s intervention, it was discovered that Onalaja billed the couple N300,000 for the baby, who was allegedly kept in his care by the mother.

The baby’s mother, Idiat Babatunde, claimed she was a student at the Offa Polytechnic in Kwara State and she gave her baby to Onalaja to enable her return to school to complete her clearance.

When asked why she gave her child to the suspect, Idiat, 29, said because he’s a doctor and a friend to her husband.

However, it was learnt that she collected N70,000 from the 136,000 from Onalaja before leaving for school, confirming suspicions that she was in on the plot to sell her baby.

She was also said to have given the baby up because her supposed husband, Akiola, abandoned her after impregnating her and relocated to Rivers State.

Unable to fend for the child a week after it was born, she handed over the baby to Omolaja, who has been the Ayangbile’s doctor since 2009.

But Idiat denied giving up her baby or collecting any money, stating that she could not carry the child to school because it would have been difficult for her to cope.

She further claimed she still had a missing script and had no place of her own, adding that she always called Onalaja to check on her child.

She said: “I gave birth in September 5 and on September 13, I gave the baby to Dr. Onalaja because I needed to go back to school in order to complete my clearance so that I can go for NYSC with the next batch.

“I gave him the baby because I was having issues with my husband and we have been separated. I planned to spend two weeks in school and two weeks in Lagos.

“But that same week that I went to school, I received a call that I should come and identify my baby at Ketu police station. I was surprised because I did not know what my baby could be doing in Ketu.

“I stay at Ipaja with my cousin and he (Onalaja) stays in Ipaja too. My husband is a driver and since we had accommodation problem, he has moved to Port Harcourt.

“So, I called my husband and told him. He said he would come to Lagos since it concerned his baby.

“So, I quickly left school and came to Lagos and that was how I knew that he sold my baby for N300,000 and that they were caught because the landlady of the people who bought the baby suspected something was wrong”.

But the Ayangbiles said they were shocked when the mother of the child suddenly surfaced because they had been asking their ‘doctor’ about the baby’s mother and each time, he told them not to worry.

Mrs. Ayangbile, 35, said: “I have known him for many years now. He is the one treating me. Since I got married in 2009, I have been having miscarriage and it was causing problem in my marriage.

“He used to tell us to adopt but my husband never liked the idea. In fact, I have even moved out of my husband’s house and was living on my own.

“It was the baby that brought us together again. He told me and my husband about the baby and that we should adopt her. We asked where the parents of the baby are but he said we should not worry about the parents.

However, the man in the middle of the entire drama denied selling the baby, saying he only wanted the Ayangbiles to adopt her.

He further claimed that he asked them to hold on to the baby so that he could take them to Alausa for the processing of relevant ‘adoption’ papers.

Onalaja confirmed Idiat handed over her baby to him because she could not take care of the child, adding that he wanted the couple, who had the means, to adopt her.

He said: “I did not sell the baby. It was adoption paper I wanted them to go and do. Idiat left the baby in my care and she was aware of the adoption.

“I did not collect any money from them. I told them to hold N130,000 and follow me to Alausa so that we can do the documents.

“I am not a doctor, I am a trado-medical person. I don’t have any hospital. We did everything in my house. I knew the couple (Ayangbiles) while we were at Oshodi. But Idiat and her husband are my family friends”.

Briefing reporters on the development, the Police Commissioner, Fatai Owoseni said the suspects – Onalaja and the couple who bought the baby – would be charged to court soon.

CP Owoseni also disclosed that the baby has been reunited with her mother and they are both under the watch of the Family Support Unit of the command.