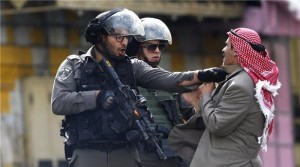 Israel’s government is facing serious questions over its use of force in the latest outbreak of violence with protesters after a number of videos appeared online showing soldiers shooting at Palestinians. Aljazeera was there:

Amnesty International told Al Jazeera on Sunday that some of the recorded incidents amounted to “extrajudicial killings”, while Human rights Watch was “strongly concerned” by Israel’s “indiscriminate and even deliberate” use of fire on demonstrators.

“These are extrajudicial killings against unarmed civilians,” Mariam Farah, the spokesperson for Amnesty International in Israel, said. On Friday, a video emerged showing a number of Israeli soldiers surrounding a young Palestinian woman allegedly holding a knife before they shot her with live bullets multiple times. Israa Ayed, 29, was critically injured.

“There is no proof whatsoever that Israa was holding a knife. The same goes for Alloun. They did not appear to have posed enough threat to the soldiers to use deliberate lethal force [on them],” Amnesty’s Farah told Al Jazeera. Since the beginning of the latest wave of violence in East Jerusalem and the occupied West Bank, 23 Palestinians were killed and 1,991 injured by Israeli security forces, according to the Palestinian health ministry.