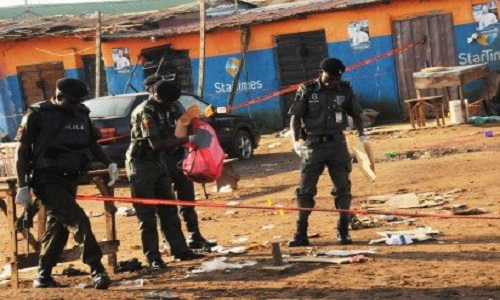 The Nigeria Police on Tuesday in Abuja announced the arrest of two suspects in connection with the Oct. 2 coordinated bombings in Nyanya and Kuje, in the Federal Capital Territory.

The bombings resulted in the death of no less than 20 persons while 21 others were injured.

The Inspector-General of Police, IGP Solomon Arase, who confirmed the arrest at the Conference of Senior Police Officers, said that the suspects aged 25 and 27 were from Kogi.

He also pointed out that the arrest had foiled an attempt by the suspects to undertake another attack in the FCT.

According to Arase, 12 already prepared and primed Home Made Explosives (HME) concealed in 12 Fayrouz soft drink cans, 28 pieces of electronic detonators and huge quantities of IED making materials were discovered from them.

“The suspects are aiding detailed police investigations into their broad terror network and will be brought to deserve justice”, he said.

The I-G assured that the police would continue to deploy its potentials to ensure public safety that could be attained by the cooperation of the public.

Mr. Arase also called on the media to continue to support the police in order to attain the national crime and security vision of the present administration.