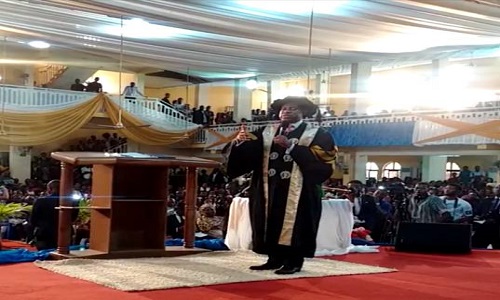 The President of Believers Loveworld Ministry aka Christ Embassy, Pastor Chris Oyakhilome, has donated a mind-boggling sum of N1 billion to the Benson Idahosa University, BIU, as part of his support to the institution, which he described as one of the legacies of his mentor and role-model, the late Archbishop Benson Idahosa.

His donation coincided with the conferment of a honourary Doctor of Divinity on him on Friday.

Oyakhilome made the donation to facilitate the building of the Faculty of Engineering at the Institution’s campus in Benin city, Edo State.

The clergy said his contribution to the university is borne out of his passion to contribute meaningfully to the development of lives, noting that the founder of the institution, late Archbishop Idahosa, positively influenced his life and ministry as a youth.

According to Oyakhilome, the television ministry of the late Archbishop Idahosa, popularly known as Idahosa World Outreach (IWO-Television), was the first of its kind in the country, noting that it helped to liberate lost souls and assisted Christians in the world to accept Christ.

“The Archbishop Benson Idahosa was one of the most remarkable and inspiring personality of the 20th Century. It is a fact of life that those who did not have the privilege to get to meet him are blessed to meet him through many of us. The impact of the Archbishop on me as an individual is unquantifiable.

The Chancellor of BIU, Archbishop Margaret Idahosa, described Oyakhilome as a spiritual son of the late Archbishop Benson Idahosa, noting that the decision to honour the Christ Embassy senior pastor was in recognition of his contribution to building and saving lives through his ministry.