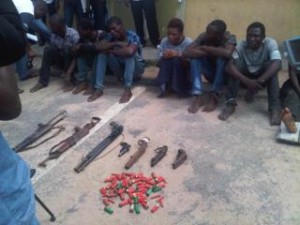 During the three-hour attack, they forced one of their victims to serve them food before they began their operation. They reportedly sat in the sitting room and were served eba (food made from fried cassava paste) and soup which they ate before they started the operation. The armed men stormed Adenuga and Joseph streets at about 1.30 am and carted away money and valuable properties belonging to residents.

According the victims, the operation lasted till 4.30 am. P.M.NEWS gathered that for some weeks now, the residents of Ejigbo have not known peace due to incessant robbery attacks in the area. Many homes in the area have witnessed several attacks by robbers who cart away their money and valuables. P.M.NEWS gathered that some of the streets affected are Fayemi, Surprise Avenue, Oboye, Joseph and others.

At Surprise Avenue, many shops were broken and items looted by the robbers. It was learnt that the robbers also waylay residents in the early morning and evening and force them to part with their valuable items at gun point. At Fayemi and Dorcas streets as well as Idimu road, many residents have lost their valuables such as handsets, necklace, money and others to the robbers. A victim who resides at Joseph street said the robbers stormed their house, forced the door open and tied some people and locked them in one of the rooms before ransacking everywhere.