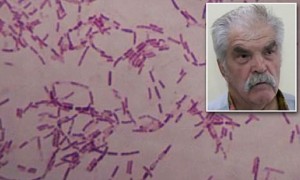 A group of Russian scientists believe that the secret to eternal youth might actually lie in the permafrost of Siberia. They’re experimenting with a strain of bacteria that has managed to survive for millions of years in the permafrost. One enterprising scientist has even injected himself with the ancient bacteria discovered in 2009, in Sakha Republic, Siberia. Scoop has more:

Anatoli Brouchkov, head of the Geocryology Department at Moscow State University, is the man behind the remarkable discovery. Two years ago, he volunteered to become a guinea pig for the 3.5 million year old bacteria after several successful trials on mice and human blood cells. And he claims to have become healthier and more energetic ever since. “I started to work longer, I’ve never had a flu for the last two years,” he told The Siberian Times.

He did admit that his feeling of being healthier could be more psychological than scientific. “I cannot professionally describe the effects,” he said. “It was quite clear for me that I did not catch flu for two years. Of course, such experiments need to be conducted in clinic, with the special equipment and statistics. Then we could say clearly about all the effects.”

So it is too early to market the bacteria, because scientists are yet to understand how exactly it prevents ageing. So far, they’ve only been able to determine that the bacteria promotes longevity in mice and fertility in older female mice, but they haven’t uncovered its secret. They still need to understand “what keeps the bacteria alive, what is the mechanism preventing the age damages, and how can we use it for our own benefits.”

“If we can find the mechanism how that bacteria stays alive, then we probably would be able to find the tool to prolong our own life,” he said. Meanwhile, Brouchkov says that the local Yakut population is already benefiting from the bacteria. “The permafrost is thawing, and I guess these bacteria get into the environment, into the water, so the Yakut people, in fact, for a long time are getting these cells with water, and even seem to live longer than some other nations.”