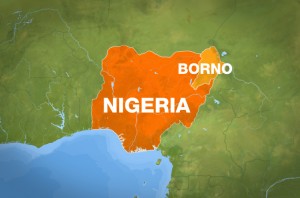 Dozens of worshippers were killed on Thursday when two suicide bombers blew themselves up in a mosque in Maiduguri, witnesses said.

“All the people in the mosque died. Not a single one escaped,” said Muhtari Ahmadu, a trader near the scene.

“We counted 42 dead bodies outside the mosque,” Amadu Marte, a vigilante supporting the security forces in the fight against the Islamist Boko Haram group added.

Borno state police confirmed that the mosque was hit by twin bombings, saying about 14 died.

Following the explosions, the mosque collapsed and injured “many people praying”, the police said in a statement.

“Casualties have been evacuated to UMTH (University of Maiduguri Teaching Hospital) and specialist hospitals in Maiduguri,” it added.

The bombers slipped into the mosque disguised as worshippers, witnesses said.

One of the attackers set off the first blast when he entered the mosque, they said. The second bomber detonated his explosives soon after, when many had rushed to the scene to help the first victims.

“When rescuers and sympathizers gathered in front of the place, the second one went off, killing many of them,” Marte said.

The blasts occurred around 6:30pm (1730 GMT) in Molai, in the western suburbs of Maiduguri, where worshippers had gathered for evening prayers, the witnesses said.