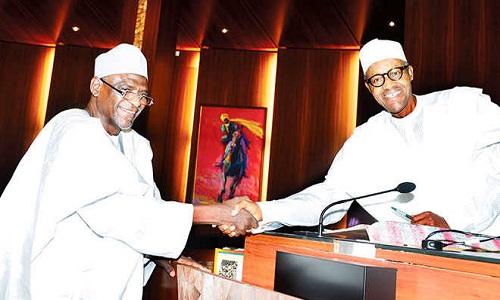 Members of staff of the Federal Ministry of Education on Wednesday in Abuja trooped out of their offices, cheered and waved as they welcomed the new Minister of Education, Adamu Adamu.

Adamu was ushered into his office by Hajia Hindatu Abdullahi, the Acting Permanent Secretary of the ministry and other principal members of staff.

President Muhammadu Buhari had appointed 36 ministers with their portfolios and named Adamu as the Minister of Education, while Prof. Anthony Anwuka, was named the Minister of State for Education.

Anwuka, who arrived earlier at the ministry, was also welcomed with cheers and warmth.

Abdullahi told newsmen that Buhari had directed the ministers to officially resume duty on Nov. 17, adding that Adamu came just to see his office.

According to the Acting permanent secretary, every staff of the ministry is ready to cooperate with the new minister in order to move the education sector forward.

“We are really happy; you can see the mood in the ministry now; not only me but the staff and management, everybody is happy.

“We are ready to sit down with the minister to drive the agenda of Mr President with regards to education.

“We will sit down and hit the ground running because education is a social service that requires driving it with passion, commitment and technical know-how”, she said.

Adamu, who hails from Bauchi State, is a trained accountant and a veteran journalist. (NAN)