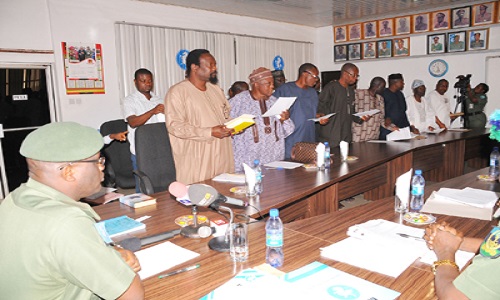 The Ekiti State chapter of the Peoples Democratic Party (PDP) has faulted the evidence of its expelled Secretary, Dr. Tope Aluko, before the Maj.-Gen. Adeniyi Oyebade-led Army panel on the alleged involvement of army personnel during the June 21, 2014 governorship election in the state as well as the 2015 general elections.

The party said it was ridiculous that a non-member of the party could be admitted to give evidence at the panel despite his “widely publicized expulsion by the party on July 31”.

It would be recalled that when it got to Aluko’s turn to testify before the panel, he pleaded to do so off camera for security reasons.

The expelled Ekiti PDP scribe was a member of the security committee for the 2014 governorship polls in the state and was believed to have tendered “very incriminating” documents that would assist the panel in its ongoing probe.

But the PDP in a statement issued by its Publicity Secretary, Jackson Adebayo, wondered why a party chieftain who had been expelled, could be allowed to testify before the panel, maintaining that he no longer occupies the position of the PDP Secretary.

The party warned that “whatever is recorded by the military panel in the name of Aluko on the involvement of military in the Ekiti election will render the whole exercise illegal and a charade”.

The Ekiti PDP spokesman posted that Aluko had only demonstrated the traits of anti-party activities that led to his expulsion, adding that there was nothing objective or reliable that could be taken from him in the case.