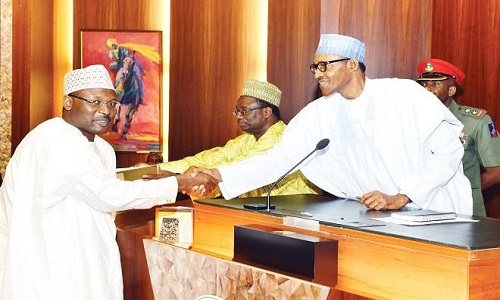 The Peoples Democratic Party has asked President Muhammadu Buhari to send an executive bill to the National Assembly if he is serious about electoral reforms.

The opposition party was reacting to the president’s lamentation on Monday that it was not enough for election tribunals to nullify elections and order for rerun, but those responsible for flawed elections should no longer go unpunished.

Buhari made this view known after he administered oaths of office on the National Chairman of the Independent National Electoral Commission, Prof. Mahmood Yakubu, and five INEC national commissioners at the Presidential Villa, Abuja.

“It is not just enough for an election to be cancelled and a new one ordered. It would be much better if all whose action or inaction led to the cancellation of such election to be investigated and if culpable prosecuted, whether they are individuals as candidates or party agents; institutions, such as political party, electoral body; or public officers as electoral staff or security agents.

“Similarly, perpetrators of electoral violence and thuggery should not be spared. Unless our system stops covering up all forms of electoral malpractices, we can hardly get it right. No system endures with impunity”, the president was quoted as saying.

Reacting to the statement, Deputy National Publicity Secretary of the PDP, Abdullahi Jalo, said Nigerians had not forgotten that it was a PDP administration that made the necessary adjustments to the Electoral Act that ushered in improved elections, beginning from 2011.

“The President more than everybody else knows what to do concerning such matters. If he desires more sanctions for electoral offenders he should forward an executive bill to the National Assembly for the laws to be amended”, Jalo said.