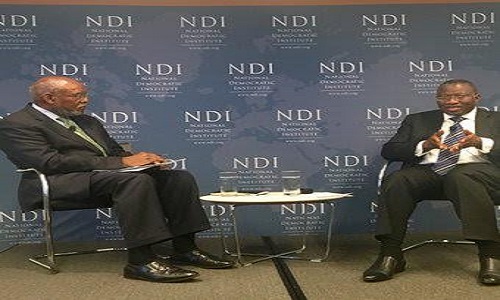 Former President Goodluck Jonathan has weighed in on the raging controversy over arms procurement under his administration, saying he never signed any contract in the range of $2 billion as alleged by a presidential investigations committee.

The former National Security Adviser, NSA, Col. Sambo Dasuki (retd.), was fingered in the committee’s interim report of managing and supervising the extra-budgetary spending on arms procurement under the Jonathan administration to the tune of N643.8 billion and an additional $2.2 billion in the foreign currency component.

In a widely circulated statement on Wednesday after President Muhammadu Buhari ordered his arrest for the alleged fraud, Mr. Dasuki claimed that all contracts and accruing payments were made based on the approval of Mr. Jonathan, adding that due process and military procurement regulations were followed in all the transactions.

“Nigerians should note that all the services generated the types of equipment needed, sourced suppliers most times and after consideration by the Office of the NSA, the President will approve application for payment,” said Mr. Dasuki.

Reacting to the controversy at a forum in Washington DC, the former president said he did not award any $2 billion contract for procurement of weapons, querying “Where did the money come from?”

Mr. Jonathan, who insisted that he never awarded any $2billion arms contract, hinted that the figures being bandied around by the Buhari administration were false and unsubstantiated.

The former president made these clarifications at an event titled: “Presidential elections and democratic consolidation in Africa: Case studies on Nigeria and Tanzania”, co-hosted by National Democratic Institute (NDI) and the Center for Strategic and International Studies (CSIS).

Mr. Jonathan was the sole speaker.

The immediate past president touched on the contract issue after he stated that he was aware of allegations of huge sums of money that were said to be missing from the Nigerian treasury, but he claimed that some of the figures reported are too huge to be true.

“Sometimes, I feel sad when people mention these figures”, he added.

Making reference to his successor, Jonathan said, “When the president (Buhari) paid official visit to the US, there were some figures that were mentioned that I don’t believe”.

He drew attention to figures like the $150billion alleged to have been stolen in previous Nigerian administrations, but Mr. Jonathan laughed off the probability of “$150 billion American money” missing and “Americans will not know where it is”, adding that at any rate, President Buhari did not mention his administration.

The former president was equally not in agreement with those who alleged that the sum of $59.8 million was misappropriated within a 12-month period while he was in office.

“In Nigeria, if you lose $59.8 million in a year, federal and state governments will not pay salaries”, he said, adding that there is no way Nigerian budget can accommodate such a loss without the country coming to a standstill.

“Of course we brought international audit teams, forensic auditors and they didn’t see that”, he said.

The former President insisted that he does not want to join issues with the new government, saying “I wanted to keep away from the public for at least twelve months”.