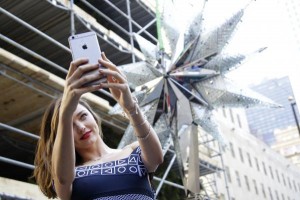 The Indian Department of Posts announced residents will soon be able to send mail featuring their own faces with stamps made from customers’ selfies. India Post said the “My Stamp” scheme, which is expected to be rolled out by the end of the year, will allow customers to use their own selfies as the photos on a sheet of 12 stamps and users without their own snapshots can have their pictures taken on the spot at post offices.

The department said the service would cost $4.50 and the individual stamps would each be equivalent to a standard 8-cent stamp. “The process is simple. A good photograph will be scanned to get it converted into postage stamp. In case one do not have photos, then it will be clicked by the equipment on the spot,” RN Yadav, senior post master at the Head Post Office, told The Times of India.

Officials said the “My Stamp” service proved popular when it was tested in New Delhi in 2011 and Tamil Nadu in 2013 and it is now being rolled out in other locations.