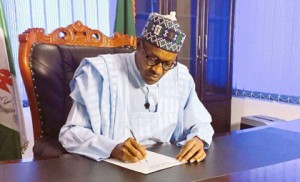 President Muhammadu Buhari, in Tehran, Iran, yesterday, disclosed that many of those who looted the public treasuries in the government of former President Goodluck Jonathan had started returning the stolen funds to the government but maintained that they would still be prosecuted in due course.

He explained that the prosecution of suspects is taking time because the government is painstakingly gathering hard evidence against them.

Speaking at an interactive session with members of the Nigerian community in Tehran, Iran, yesterday, Buhari decried the constraints inherent in democracy, recalling that it was easier for him as a military Head of State in 1985 to arrest corrupt individuals and put them in protective custody for them to prove their innocence than in the present democratic practice.

He acknowledged that under the rule of law, the suspects are presumed innocent until convicted by the law.

“On corruption; yes, they are still innocent. But, we are collecting documents and some of them have started voluntarily returning something. But we want all. When we get those documents, we will formally charge them to court and then we will ask Nigerians to know those who abused their trust when they are entrusted with public funds. So, the day of reckoning is gradually approaching.”

Speaking on power generation and distribution, President Buhari stated that though his government was yet to give a comprehensive policy direction in the sector, there was still an improvement.

“I believe if you are in touch back at home, you would have been told that already there is some improvement in power. We haven’t said anything to them yet. I think they only find it sensible or appropriate for them to try and improve the power.

“I’m sure you know about the privatization of the power sector; your old friends NEPA or Power Holding Company of Nigeria have been sold to a number of interest groups. But, the fundamental thing about us is that we remain potential in everything except performance.

On insecurity, the President assured that peace would soon return to the troubled North-East even as he stated that his administration would also revive the educational system from primary to tertiary levels.

Also to checkmate and end the ugly trend of gas theft, President Buhari announced that the existing Military Task Forces will be reorganized to ensure a successful protection of the network of gas pipelines.

He noted that “although some improvement in power had been recorded in the recent period,” sabotage of pipeline installations had continued to be a problem.

“Power is a running battle because the saboteurs are still there. We have the potential. We have gas, we have qualified people but we are contending with a lot of saboteurs who go and blow up installations. When gas is pumped to Egbin and such other power stations, thieves and saboteurs such as the militants cut those supplies.”

Another factor, according to the President, is the reduced role of the government in the sector due to the privatization of the institutions under the Power Handling Company of Nigeria, PHCN in the process of which, the facilities “have been sold to a number of interest groups.”

He, however, assured that the military task-forces with representatives from the Army, Navy, Air Force, the Police and the secret services will be reconstituted to secure the pipelines.

“Supplies will become steady; there will be less sabotage as we secure the pipelines,” he said.